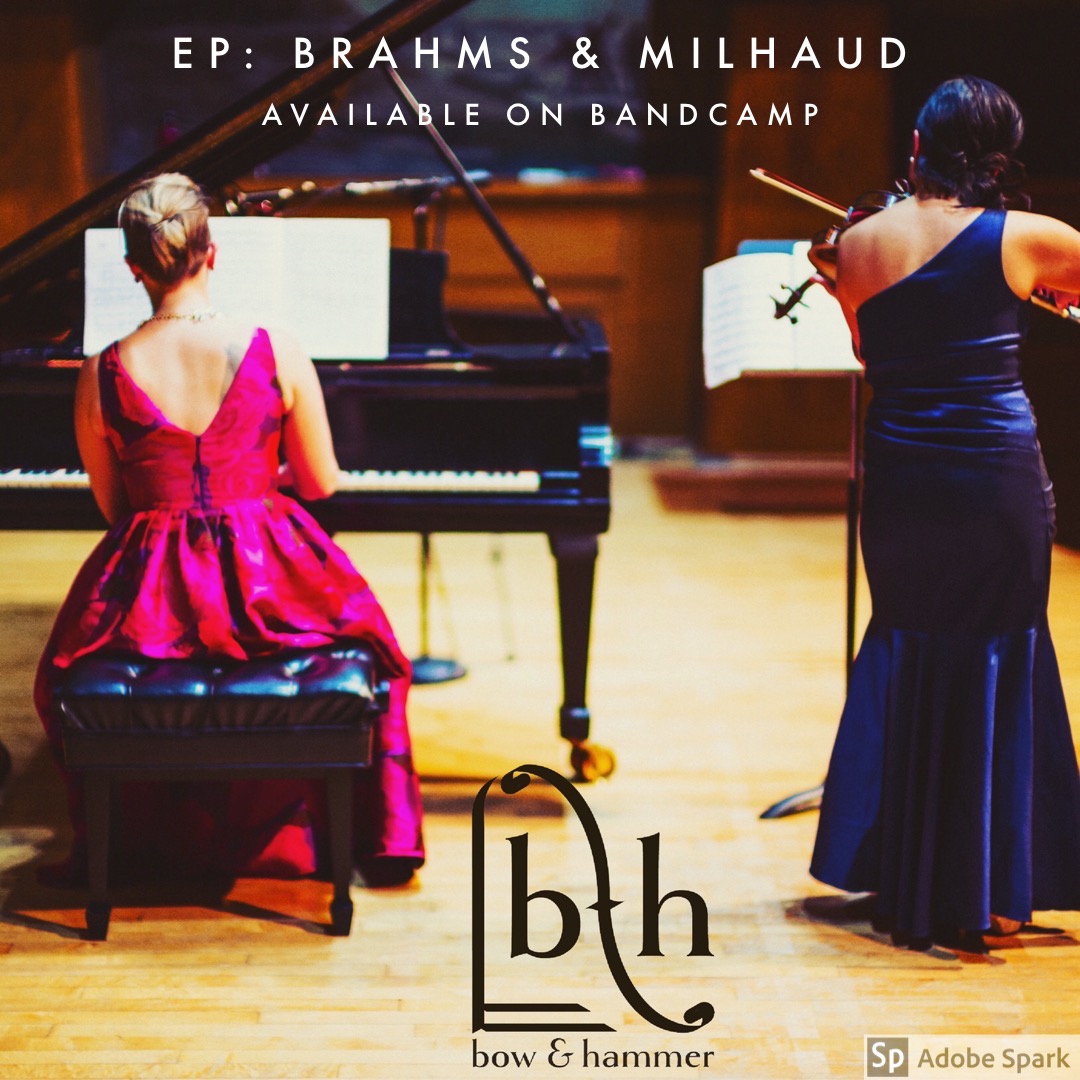 Bow & Hammer refers to Chicago-based violin & piano duo, formed by friends Kathryn Satoh and Elizabeth Newkirk, respectively. Just as their name addresses the core of their sound, their performances have been addressing the core of duo chamber music as “A New Niche” (Chamber Music of America Magazine) since they formed in 2012. Though they have a sweet tooth for compositions from the early 20th century (1917 to be exact), they use both modern and traditional repertoire to craft well-balanced programs that connoisseurs and newcomers alike can enjoy.

Avid disbelievers that classical music is only for an educated or experienced ear, Bow & Hammer presents their music with personal narratives, whimsical banter, and behind the scenes stories (WGN Radio, ScapiRadio). Their productions include a colorful spectrum of shows, from inspiring cocktail menus with Ravel (a ‘Ravelation’, get it? Thanks WFMT!) or preserving folk values of Bartok through Pakistani-inspired textile art installations (Chicago Sun Times), to hosting a brisket-fueled, dog friendly Battle of the Bands as part of an audience-voted programming series now in its fifth season. Bow & Hammer “create[s] a space where one feels welcome to completely immerse themselves in the music and confront their innermost feelings.”

Bow & Hammer has built a healthy rapport in their sweet home Chicago that they are proud to share, continuously removing chamber music from its insulated bubble. Élevé and the Coursed Concert create a platform for chamber music to inspire other disciplines, as well as be uplifted from the creativity and output of others. IndustryNight and Chamber Sundays raise a toast to how easily classical music can be integrated with everyday life. Chefs, retailers, farmers, and distillers are perhaps unorthodox but invaluable to their rapidly growing list of collaborators. As a demonstration of these relevant collaborations, Bow & Hammer is thrilled to represent Chicago company Metric Coffee with a proprietary blend that includes a download of their demo, EP: Brahms and Milhaud. Each interaction embraces and extends their roles and responsibilities as performers to engage their quirky and nuanced community.

The 2018-2019 season marks the fifth year of their series IndustryNight, the third of Élevé, and the premiere of Chamber Sundays and the Coursed Concert. Additionally, they have held residencies at Banff Centre for the Creative Arts, and overseas at Orvieto Musica. Bow & Hammer’s ventures have connected them with artists/collaborators in France, Italy, New York, Los Angeles, Canada, Spain, Germany, and Australia. Looking forward, Bow & Hammer is working to tour Élevé and the Coursed Concert nationally, premiere a commission by composer Sebastian Huydts, and record a full-length album featuring Mozart, Ravel and Bartók.