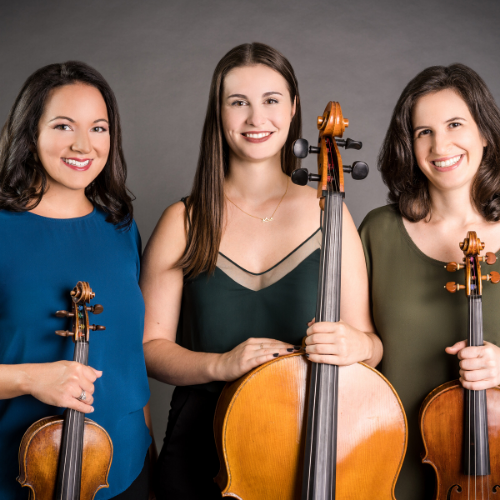 Specialty
“They are essentially redefining what a chamber music concert should sound like in the twenty-first century, and they are very good at it.” – Erik Abbink, Oak Bay Music
Genre
Classical

Inspired by the Fair Trade social movement, we believe that properly compensating musicians for their artistic endeavors is not only ethical and fair but elevates the quality of performances and, in turn, the audience experience. We seek to develop audience connections through highly interactive performances and educational programs featuring a diverse range of chamber music with a focus on inclusive programming.

Our core performing ensemble, the Fair Trade Trio is a professional string trio that specializes in creating accessible performances for all audiences and has a mission to champion the works of living female composers alongside the standard chamber music canon.

Comprised of violinist Ashley Windle, violist Hannah Levinson, and cellist Madeline Fayette, the trio specializes in creating accessible performances for all audiences and has a mission to champion the works of living female composers alongside the standard chamber music canon.

The 2019-20 season will highlight works written by living female composers including Jessica Meyer’s “I Only Speak of the Sun”, Kaija Saariaho’s “Cloud” Trio, and Missy Mazzoli’s “Lies You Can Believe In” with performances at Music at Our Saviour’s Atonement (MOSA), The Metropolitan Playhouse and The DiMenna Center for Classical Music. In addition to the works by living female composers, programming will include Schnittke’s String Trio and Faure’s Piano Quartet No. 1 with pianist Taisiya Pushkar.

Last season the Trio made its debut at the new music venue MISE-EN_PLACE in Brooklyn, NY and presented the world premiere of Alon Nechushtan’s “Fractured Fairy Tales,” a work which is dedicated to the Fair Trade Trio. In the spring, the Trio was in residency at Smith College where it collaborated with the composition students to create new works for string trio. The Trio coached the students on the best composition practices, allowing the students to hear their music come to life through experimentation during the workshop days and culminating in a final performance of the students’ works. Additionally, the Fair Trade Trio performed a concert featuring works of living female composers, including Cheryl Frances-Hoad’s “The Ogre Lover,” based on a poem by Ted Hughes about Smith College graduate Sylvia Plath.

The Fair Trade Trio has completed two tours, in 2015 and 2017, of the Pacific Northwest where it performed at the Silk Purse Arts Centre in Vancouver, BC; the Oak Bay chamber music series in Victoria, BC; and the KidsQuest museum in Seattle, WA. The Trio also made its debut in 2017 at the Old Church in Portland, OR and at the Resonance at SOMA Towers in Seattle, WA with Seattle Symphony pianist Li-Tan Hsu. For this tour, as part of its mission to champion the works of living female composers, the Fair Trade Chamber Music Society commissioned composer Emily Doolittle to compose a piece for its 2017 tour and it performed the world premiere of her work, “Field Guide,” in Vancouver.

As passionate about teaching as it is about performing, the Fair Trade Trio has developed partnerships with several area music programs including the WHIN Music Project, the Corona Youth Music Project, the Bronx Global Learning Institute for Girls, and the Frank Sinatra School of the Arts. All educational partner schools receive free performances at their schools and complimentary admission to Fair Trade concerts. Each season, the Fair Trade Trio performs for Music for Autism, a concert series focused on enhancing quality of life and raising public awareness through free, autism-friendly, interactive concerts developed specifically for individuals with autism and their families.