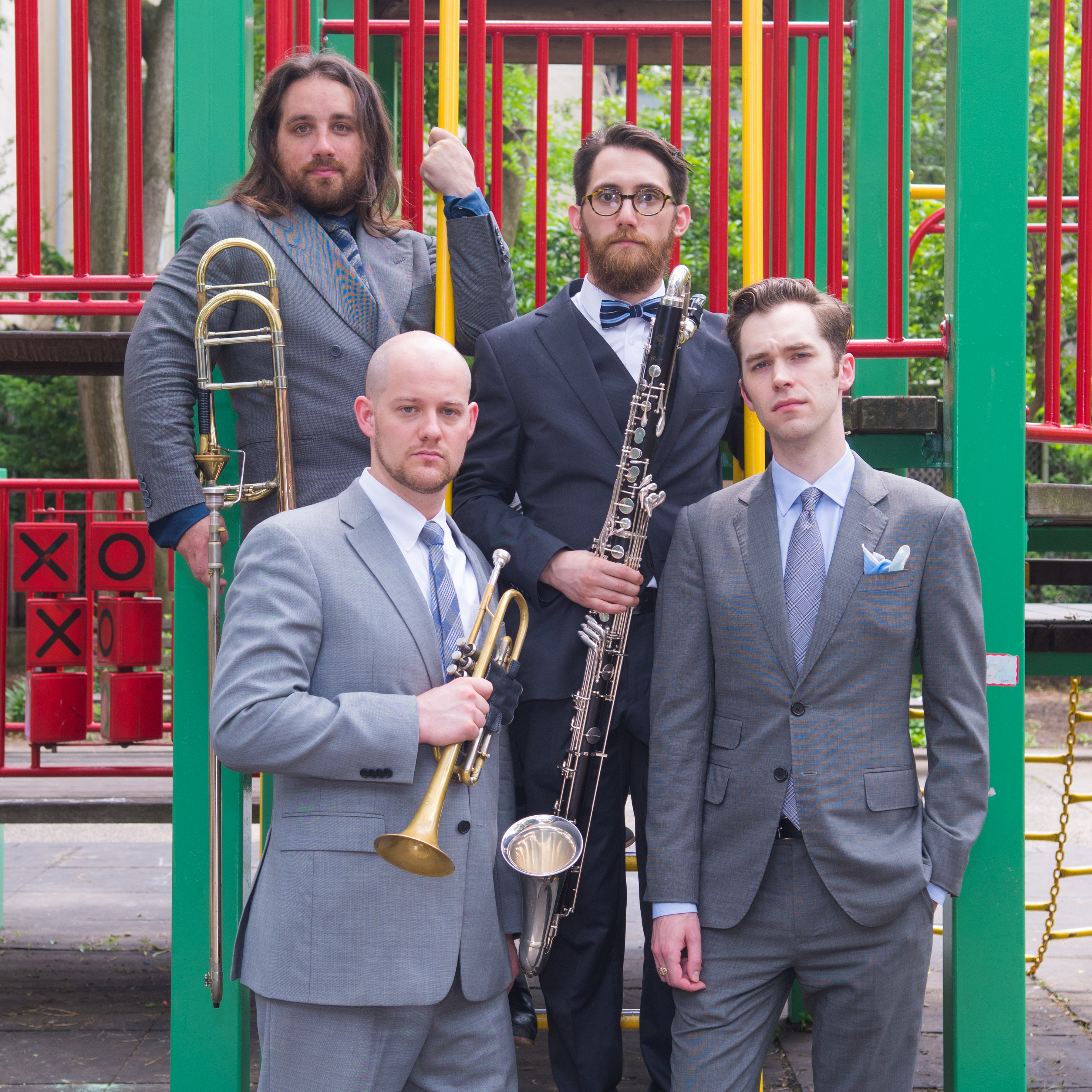 New York City-based new music chamber group loadbang is building a new kind of music for mixed ensemble of trumpet, trombone, bass clarinet, and baritone voice. Since their founding in 2008, they have been praised as ‘cultivated’ by The New Yorker, ‘an extra-cool new music group’ and ‘exhilarating’ by the Baltimore Sun, ‘inventive’ by the New York Times and called a 'formidable new-music force' by TimeOutNY. Their unique lung-powered instrumentation has provoked diverse responses from composers, resulting in a repertoire comprising an inclusive picture of composition today. In New York City, they have been recently presented by and performed at Miller Theater, Symphony Space, MATA and the Avant Music Festival; on American tours at Da Camera of Houston, Rothko Chapel, and the Festival of New American Music at Sacramento State University; and internationally at Ostrava Days (Czech Republic), China-ASEAN Music Week (China) and Shanghai Symphony Hall (China).

loadbang has premiered more than 275 works, written by members of the ensemble, emerging artists, and today's leading composers. Their repertoire includes works by Pulitzer Prize winners David Lang and Charles Wuorinen; Rome Prize winners Andy Akiho and Paula Matthusen; and Guggenheim Fellow Alex Mincek. Not content to dwell solely in the realm of notated music, loadbang is known for its searing and unpredictable improvisations, exploring the edges of instrumental and vocal timbre and technique, and blurring the line between composed and extemporaneous music. To this end, they have embarked on a project to record improvisations and improvised works written by members of the ensemble. These recordings are designed, fabricated, and released in hand-made limited editions.  loadbang can also be heard on a 2012 release of the music by John Cage on Avant Media Records, a 2013 release of the music of loadbang member Andy Kozar titled 'On the end...' on ANALOG Arts Records which was called ‘virtuosic’ by The New Yorker, a 2014 release on ANALOG Arts Records titled Monodramas,  a 2015 release on New Focus Recordings titled LUNGPOWERED which was called ‘new, confident, and weird’ by I Care If You Listen and 'an album of quietly complex emotions' by The New Yorker, a 2017 Bridge Records release titled Charles Wuorinen, Vol. 3, featuring the music of Charles Wuorinen, and a 2018 release on New Focus Recordings titled ‘old fires catch old buildings’of which was said ‘Though they arrived on the scene without a repertoire to speak of, loadbang’s decade-long output now speaks for itself in quality and depth of involvement’ by I Care If You Listen.

loadbang is dedicated to education and cultivation of an enthusiasm for new music. They have worked with students ranging from elementary schoolers in the New York Philharmonic's Very Young Composers program and the Baltimore Symphony Orchestra’s OrchKids Program to college aged student composers at institutions including Columbia University, Cornell University, Manhattan School of Music, New York University, Peabody Conservatory, Princeton University, University of Buffalo, and Yale University. They are in residence at the Charlotte New Music Festival, the Longy School of Music's summer program Divergent Studio, and all four members are on the instrumental and chamber music faculty of the Longy School of Music of Bard College in Boston.